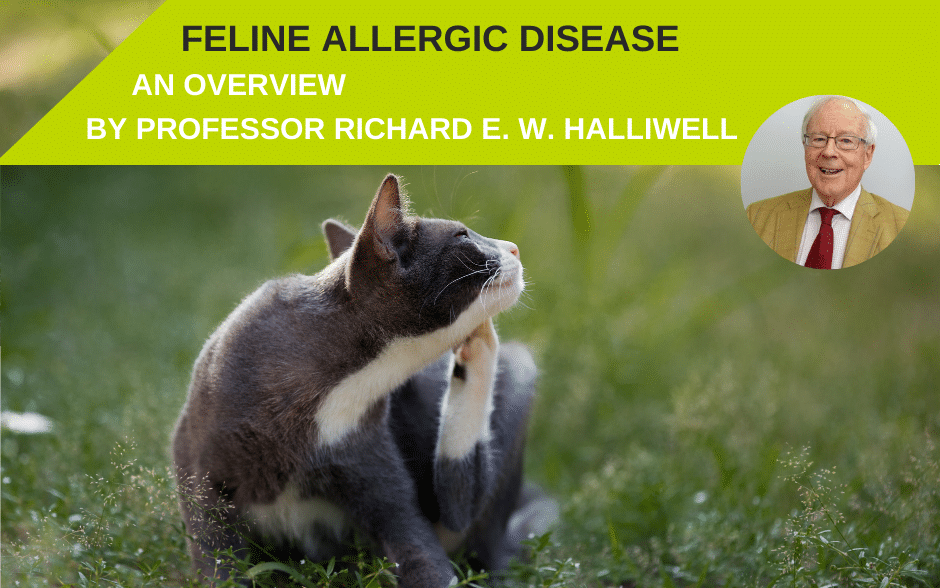 The International Committee on Allergic Diseases of Animals (ICADA) has recently published proposals to redefine the nomenclature of allergic diseases of the cat.1 Although it was acknowledged that a number of feline conditions could fall under the definition of “atopic”, the fact that what was previously termed “atopic dermatitis” had virtually none of the features of either human or canine atopic dermatitis, has led to proposals to adopt new terminology as follows:

This is an umbrella term that “encompasses allergic dermatitis associated with environmental allergens, food allergy and asthma that may be associated with IgE antibodies. Food allergy and flea allergy can both either mimic and/or contribute to this syndrome and their potential role must be assessed before deciding on the therapeutic approach”.

This is defined as “an inflammatory and pruritic skin syndrome of cats manifested by a spectrum of reaction patterns, none of which are specific for this syndrome, and that may be associated with IgE antibodies to environmental allergens. Food allergy and flea allergy can both either mimic and/or contribute to this syndrome and their potential role must be assessed before deciding on the therapeutic approach” (formerly described as atopic dermatitis or non-flea non-food-induced hypersensitivity dermatitis).

“This is an aetiologic diagnosis referring to any clinical manifestations, including those of FASS, that are attributable to immunological reactivity to an ingested food item”. It is suggested that the term “Adverse Food Reaction” be abandoned in that the definitive attribution of reactivity in such cases to non-immunological factors has yet to be unequivocally demonstrated. Food allergy can mimic or contribute to the clinical signs of FASS.

This is not considered an atopic disease, although as is the case for food allergy, the manifestations can mimic or contribute to the clinical signs of FASS.

This is “an eosinophilic inflammatory disease affecting the bronchioles and leading to reversible bronchoconstriction and airway remodelling, manifested by acute respiratory distress or chronic coughing and expiratory wheezing, and that may be associated with IgE antibodies to inhaled allergens”.

In the case of FASS and asthma it is likely that both extrinsic (associated with allergen exposure) and intrinsic (non-allergic) variants exist. Thus, lack of an association with IgE antibodies does not preclude such a diagnosis.

The pruritic allergic conditions of the feline skin may show differing reaction patterns – either alone or in combination, namely (i) miliary dermatitis, (ii) eosinophilic granuloma complex (eosinophilic plaques, eosinophilic granulomas (also termed linear granuloma) or indolent ulcers), (iii) symmetrical (barbered) alopecia and (iv) erosions and ulcerations of the head, face and neck. Some of these patterns can also result from a range of non-allergic conditions including dermatophytosis and staphylococcal infections, and some cases are idiopathic. 1. This commences with a thorough history and full clinical examination, skin scrapings and cytology to eliminate parasitic diseases, and possibly cultures to rule out dermatophytosis and identify contributions from bacteria and/or Malassezia. Trial parasiticidal therapy is always undertaken if there is any likelihood of FAD, to rule out this diagnosis.

FAD can present with any of the reaction patterns (even indolent ulcers). Distribution is often generalized, but the head, face and ears are sometimes spared, with lesion distribution favouring the rump, tail, flanks and dorsum.

2. The possibility of food allergy should then be explored. Aided by a dietary history +/- results of food antigen serology, either a hydrolysed or single antigen diet is fed for up to 8 weeks. Oral corticosteroids can be given for the first 1-2 weeks for symptomatic relief. If a home-prepared diet is fed, ensure adequacy of taurine by supplementation or feeding fresh meat. Remission of signs and relapse upon subsequent challenge is diagnostic, with partial response indicating a combination of food allergy and FASS.

52% commence at <3yrs with 26% > 6yrs.2 Can cause any reaction pattern but there is often a predilection for the head, face and neck. Concomitant gastrointestinal (GI) signs are seen in 21%, respiratory signs (rhinitis or asthma) in 7% and otitis in 7%.2

3. After eliminating FAD and other parasitic diseases, food allergy and microbial infections, the presumptive diagnosis is FASS – which, as in the case of atopic dermatitis in the dog, is a diagnosis by exclusion. Intradermal tests and serology are not diagnostic but must be performed if allergen-specific immunotherapy (ASIT) is considered for treatment.

For a full and detailed analysis of treatment options and their efficacy please refer to a recent open-access publication.4

• Immunotherapy (ASIT) – the only treatment with the possibility of a cure. Good response in 57% – 65% of cases3,5 and the first choice of many dermatologists.

• Corticosteroids, e.g. 1-1.5 mg/kg of methylprednisolone once daily or 1-2mg/kg of prednisolone divided BID then tapered to around 25% of the starting dose, possibly supplemented by topicals are reported as generally effective. Topical use of hydrocortisone aceponate (Cortavance®, Virbac) was reportedly effective as sole therapy in 7/10 cats in one study5 and appears well tolerated although not licensed for cats. Long-acting injectables are not recommended.

• Essential fatty acids may be of some limited benefit.

• Ciclosporin at 7.0mg/kg daily then EOD and then biweekly is effective. However, it should be avoided in toxoplasma affected cats, and treated cats who are serologically negative to toxoplasma must be carefully controlled to prevent possible access to infection.

• Oclacitinib (Apoquel®, Zoetis) has been reported as effective at 1mg/kg once or twice daily, but is not licensed and cases should be carefully monitored.

• Lokivetmab (Cytopoint®, Zoetis) is inappropriate for use in cats as it will induce an antibody response to the drug.

1. Cough with increased respiratory effort most noticeable on expiration.

2. Auscultation: Wheezes and expiratory crackling which maybe hyper-resonant; maybe normal in between episodes.

3. Radiography: Bronchial pattern due to thickening of the bronchial walls; maybe flattening of the diaphragm due to hyperinflation; sometimes local atelectasis with collapse especially of the right middle lobe.

4. Bronchoalveolar lavage (BAL) to look for eosinophils which often comprise 17-20% of cells (6-7% in normal cats, occasionally more). Neutrophilic inflammation is the marker of chronic bronchitis.

5. Faecal examination + flotation to look for evidence of parasites.

6. Blood counts are not generally helpful as peripheral eosinophilia is an inconstant finding.

When presented showing acute respiratory distress treatment should include:

• Bronchodilators such as terbutaline 0.01mg/kg IV, IM or SC; albuterol administered via nebulization or via a metered-dose inhaler.

• Bronchodilators should be accompanied by corticosteroid injections to reduce the underlying inflammation. Options for maintenance therapy include:

• Inhaled steroids such as fluticasone via a metered inhaler in doses of 45μg or 110μg BID or budesonide at 400μg BID.

• Allergen avoidance was effective in 3 cats allergic to storage mites by avoiding dry foods.7 Avoiding house dust mites, which are major implicated allergens, is difficult, and this has not been shown to be effective thus far.

• Allergen-specific immunotherapy (ASIT) with allergens selected by serology or intradermal testing. In one study, ASIT following IgE serology resulted in complete remission in 8/12 cases.7 In another study of 4 cases, the response rates were graded. The mean overall improvement was 89% with one case completely cured.5 ASIT was found to be very effective in the experimental model of feline asthma and is the only therapy that has the potential for a complete cure.

For more detailed discussions on treatment options for feline asthma see refs 4 and 8 .

8. Reneiro CR. Advances in the understanding of the pathogenesis, and diagnostics and therapeutics for feline allergic asthma. Vet J 2011; 190: 28-33.

cats,feline,Feline Allergy Blog,feline asthma
<
>
ORDER SUBMISSION BOXES
We use cookies to ensure that we give you the best experience on our website. If you continue to use this site we will assume that you are happy with it.I ACCEPTPrivacy Policy